TJ Bohemians Prague has shown how sport can be used to incorporate refugees, especially children into the new society which they are now living in. Bohemians have accepted into its various sporting divisions Ukrainian children refugees. They are already training, and practicing in the following sports:

- Modern gymnastics:  14 x girls and 1 trainer. Some of the gymnasts have already participated in their first matches.

Bohemians continue to welcome more refugees into their sporting facilities.

Feyenoord raised over €100.000  in March 2022 for Ukrainian refugees by playing a charity match against RKC Waalwijk. Thanks to this wonderful result, the Feyenoord Foundation and partner EuroParcs were able to ensure sporting and educational daytime activities and other support for the hundreds of Ukrainian refugees, who are currently staying in the Dutch holiday parks. The money raised was not only from selling tickets for the match (nearly 15 000 spectators attended), but also by organizing a special SMS campaign, a donation from Feyenoord itself and the sale of the 'match worn shirts' of both the players of Feyenoord 1 and that of Feyenoord Women 1.

'Ton Strooband, manager Social Affairs and director of the Feyenoord Foundation stated that this was a fantastic result, adding "You always hope for a nice amount for charity at matches like these, but thanks to the generous contributions of our supporters we have raised more than a hundred thousand euro for the displaced victims of the war in Ukraine. That is just unbelievable. As far as we are concerned, this social involvement is the real strength of Feyenoord. We use that strength to help the victims of the war in Ukraine here in the Netherlands.”

The football club has already donated clothing and other items to the Ukrainian refugees. The first team of Feyenoord has also made a financial contribution to the charitable foundation of former professional football player Evgeniy Levchenko, which supports several orphanages in Ukraine.

Polisportiva Pontevecchio welcomed a refugee family. Olena and her daughters Sofia and Marina, aged 16 and 10, fled in March from Odessa, Ukraine to Italy and took refuge in the city of Bologna, where the rhythmic gymnastics team of Polisportiva Pontevecchio hosted them in the former apartment of the sports center janitor that the company manages. Pontevecchio helped Marina and her family with medical examinations and documents. Marina is a gymnast in Ukraine and Pontevecchio helped her to continue training, where she joined the gym with her new Italian team, regaining her lost smile after the war.

Olympiacos SFP proudly participates in the joint effort of The Peace and Friendship Stadium, the Deputy Ministry of Sports and the Hellenic Red Cross.

Triggered by the initiative of Greek Secretariat of Sports in collaboration with the Hellenic Red Cross, the Stadium of Peace and Friendship, (headed up by the President Christina Tsiligkiri) is proceeding with the gathering of basic food items, with the aim of sorting, packaging and distributing them targeted to the Ukrainian people who have been tormented by the rampage of Russia's invasion for these months.

The universal values ​​of sports ​​find their full application in this great project of humanity and solidarity. Sports and volunteering go hand in hand in an initiative of the Deputy Minister of Culture and Sports, Lefteris Avgenakis, which will be carried out by the Hellenic Red Cross, who have the experience and know-how on how to deal with such aid.

In particular, the following will be gathered in order to be sent to Ukraine: evaporated milk, milk powder for children, canned food of all types, cereals, nuts, flour, pasta and legumes.

Olympiacos SFP participation in this action with its athletes and coaches, has from the very beginning been an integral link in a large humanitarian chain for Ukraine, stating "We continue with all our strength to demonstrate the same spirit of solidarity and substantial assistance.".

Earlier this year the Fondazione Lazio and Lazio Football organized a trip to the Ukrainian border to bring food, clothing and medical supplies for the Ukrainian people displaced by the war. All the sections of the Lazio Multisport Association participated and provided a vehicle for the trip that departed from Rome the 20th of March.

NCC Italia supported the mission providing logistics and the crew of two biancocelesti traveled 48 hours in three days to deliver the goods at shelters along the border between Poland and Ukraine.

The Krakow Kings Football Team hosted our drivers for a much needed rest. They elaborated on the ongoing efforts of the Polish people helping the millions of refugees in their country.

The initiative gave the Fondazione Lazio, Lazio Football and NCC Italia the opportunity to come to know the Donne for Ukraine Association that supports women and children who escaped the war and are now relocated in Italy.

Together, with the support of the Federazione Italiana di American Football (Fidaf), they organized an event to integrate these children with flag football teams in Rome. The event garnered the attention of national media and later this year, Fondazione Lazio, Lazio Football, Lazio Multisport Association and Fidaf will provide free sports training to Ukrainian youths residing in the Lazio region. 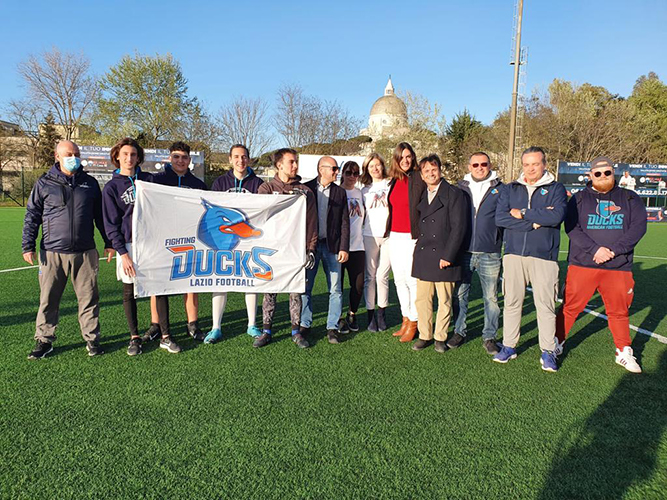 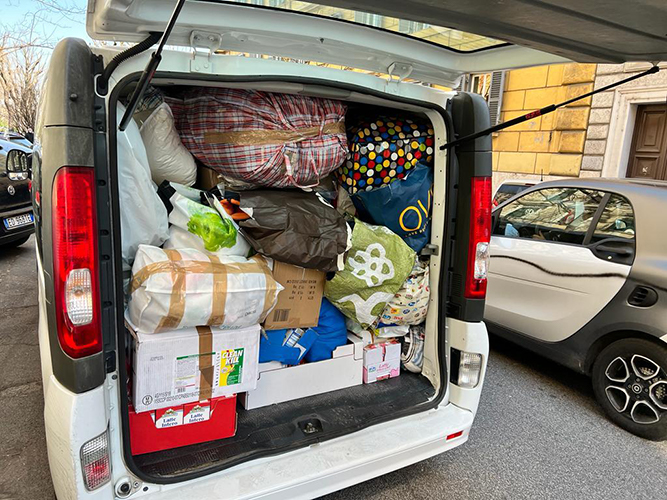