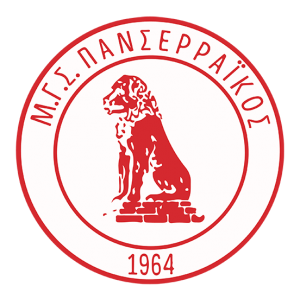 The Musician Gymnastic Club of Panserraikos was founded on May 31,1964, by the merger of two Serres football clubs, Apollo Serres and Hercules Serres.

The MGC Panserraikos historical team, based in Serres, since 1964, has developed great dynamism, in dozens of sports, in its 55 years of operation throughout the Greek territory. Panserraikos club currently counts 13+1 active teams in men and women (football, basketball, swimming, synchronized swimming, water polo, technical swimming, handball, ice hockey, cycling, triathlon, track and field, alpine skiing) and has a total more than 600 registered athletes competing in national and local championships, while 700 young athletes are practicing and training in our academies. A special honor for the club is the Wheelchair Basketball Team, which participates in the A2 Championship of the Greek Wheelchair Basketball Federation.

The flagship of the club, is the football team, which has measured significant successes in the past at the first division of Greek football. Also Panserraikos FC has won 6 national championships in second and third division. The swimming section also has its own success stories, where our team competes with the top clubs in the country, with firsts, major records and participation of our athletes in European and world championships. The synchronized swimming team, measures 6 Hellenic championships, while the men’s water polo, handball and basketball teams have won several leagues and rises in the lower National Championships of our country.

The vision of MGC Panserraikos

To become the most important club in East Macedonia and Thrace, inside and outside the field and its establishment, in the elite of Greek Sports. Promoting “fair play”, through training and continuous coaching, of athletes, and executives, according to sporting ideals, and the values of MGC Panserraikos.

The mission of MGC Panserraikos

The existence of a multicultural club, with a leading figure in the football field, in the wider area of the Prefecture of Serres, who will be respectful of the society and the sporting world, of the values and the goal achievements, contributing to the fulfillment of their expectations members and supporters.

The values of MGC Panserraikos

MGC Panserraikos and the story he carries, impose the presence of the club on the upper layers of every Greek sports Association. At the same time with the wider group rebirth at all levels, the main goal of the board is the rapid and steady return of Panserraikos to professional classes, in football, basketball and volleyball.

Creation of new proprietary facilities to accommodate all sports infrastructure components, is the main concern of the administration. The ‘red academies’ of all Panserraikos sections is very important target.

In order to meet the consumer needs of Serres fan. Will be promote branded products as well as for clothing with the brand name of MGC Panserraikos to generate revenue growth in core young fans. Through the e-shop and the development of merchandising from a set of actions such as: