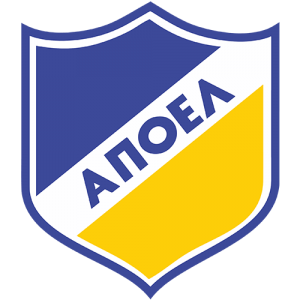 The club was formed as POEL (Podosferikos Omilos Ellinon Lefkosias, Football Club of Greeks of Nicosia) on November 8, 1926. The club’s formation came about when a group of forty people, with a common vision, met and set the foundations for creating a football club that would represent the Greek residents of the capital and express their deep desire for Cyprus’ incorporation (enosis) into Greece. The meeting took place at a traditional confectionery and the first president of the club was Giorgos Poulias.

After a journey to the football club in Alexandria, Egypt in 1927 the General Assembly of 1928 decided the players showed that they were not just good footballers but also excellent track and field athletes. Hence it was decided to create a track and field team in addition to the football team. The name APOEL was adopted to reflect this, with the ‘A’ standing for ‘Athletic’. Soon after volleyball team and a table tennis team were established.

Cyprus did not have any country-wide league until 1932. Football clubs of the time played friendly matches only. In 1932, Pezoporikos Larnaca organised an unofficial league, the first island-wide league, and it was won by APOEL after defeating AEL Limassol in the final by 4–0. In 1934, there was a disagreement between Trast AC and Anorthosis Famagusta on the organisation of the fourth unofficial league. APOEL and AEL Limassol organised a meeting for the foundation of a country-wide governing body and an official country-wide league. The meeting took place in APOEL’s clubhouse on September 23 and the establishment of the Cyprus Football Association was agreed. Two years later the APOEL football team celebrated its first championship title of the official Cyprus football league. APOEL also won the championship for the following four years, making this a very successful period for the club with 5 consecutive championships.

Politics, however, would soon spark conflict within the team. On May 23, 1948 the board of the club send a telegram to the Hellenic Association of Amateur Athletics , with the opportunity of the annual PanHellenic Track and Field Competition, which included wishes that “the rebellion” is finished. Several leftist club members perceived the telegram as a political comment on the Greek Civil War and they distanced themselves from the club. A few days later, on June 4, 1948, they founded Omonia Nicosia Football Club. Omonia is to this date the arch rival of APOEL and there has been a traditional animosity between the fans of the two teams.

More conflicts led to further struggles for APOEL. Athletes belonging to the club frequently participated in national clashes. During the 1955–59 national uprising against the British, many of APOEL’s athletes and members of the club were active members of EOKA (the National Organisation of Cypriot Fighters), the most outstanding example being the club’s track and field athlete Michalakis Karaolis who was hanged by the British colonial authorities. During this period the football team had their closest brush with relegation as most football players were actively taking part in the national struggle.

The football team were quickly back to full strength and made their debut in European Competitions (the first not only for APOEL but for any Cypriot team) in 1963, when they faced the Norwegian team SK Gjøvik-Lyn in the UEFA Cup Winners’ Cup. Two victories for APOEL over both legs (6–0, 1–0) marked APOEL’s successful European debut, as they became the first Hellenic team to progress in a European Competition. The next round against the tournament winners Sporting Club de Portugal met APOEL with their heaviest defeat ever (16–1) and put an end to APOEL’s European debut.

Other triumphs followed in the early 1970s. In 1973 the domestic double was achieved with Coach Panos Markovic. The following year APOEL became the only Cypriot team to avoid relegation from the Pan-Hellenic Greek Championship. That was also the last season that the Cypriot champion played in the Greek Football League the following year due to the volatile situation in Cyprus during 1974. As a result, APOEL entered the Cyprus League, but due to delays in the process, it was forced to play all the games but could not win any trophies. APOEL finished 1st but was not awarded the Championship which was given to the team that finished 2nd.

The first big success of the club in European competitions came on season 2009–10, when the team reached the group stages of the 2009–10 UEFA Champions League for the first time, by eliminating EB/Streymur (5–0 on agg.), FK Partizan (2–1 on agg.) and F.C. Copenhagen (3–2 on agg.) in the qualifying rounds. APOEL were drawn in Group D against Chelsea F.C., F.C. Porto and Atlético Madrid. APOEL drew 0–0 against Atlético Madrid in the first game at Vicente Calderón, lost 0–1 from Chelsea F.C. at GSP stadium on matchday 2, lost 2–1 from F.C. Porto at Dragão in the third match and lost again 0–1 from F.C. Porto at GSP Stadium on matchday 4. In the fifth match of the group APOEL drew with Atlético Madrid 1–1 at GSP Stadium and on matchday 6, APOEL drew with Chelsea F.C. at Stamford Bridge. So, APOEL finished fourth having equal points (3) with Atlético Madrid, but failed to qualify to UEFA Europa League, because of the away goal that Atlético Madrid had scored in Nicosia.

APOEL’s greatest success in European competitions came on season 2011–12. Two years after its first participation, APOEL qualified again for the UEFA Champions League group stages by eliminating Skënderbeu Korçë (6–0 on agg.), Slovan Bratislava (2–0 on agg.) and Wisła Kraków (3–2 on agg.) in the qualifying rounds. APOEL drawn in Group G, alongside F.C. Porto, Shakhtar Donetsk and Zenit St. Petersburg. On matchday 1, APOEL won 2–1 against Zenit St. Petersburg at GSP Stadium and secured its first ever victory in the UEFA Champions’ League group stage. On matchday 2, APOEL held Shakhtar Donetsk to a 1–1 draw at the Donbass Arena and in the third match they drew 1–1 with F.C. Porto at Dragão. On matchday 4, APOEL won 2–1 against F.C. Porto at GSP Stadium and on the next matchday they made history and reached the last 16 of the UEFA Champions League by holding Zenit St. Petersburg to a 0–0 draw in Petrovsky Stadium. Eventually, APOEL reached the last 16 as a group winner, despite losing 0–2 at home from Shakhtar Donetsk on the last matchday. In the last 16, APOEL was drawn against Olympique Lyonnais. Lyon won 1–0 in the first leg at Stade de Gerland, but in the second leg at GSP Stadium APOEL won 1–0, sending the match to penalties where they won 4–3, reaching the quarter-finals for the first time. In the quarter-finals, APOEL hosted Real Madrid in the first leg, but were defeated 0–3 by the Spanish giants. In the second leg at Santiago Bernabéu, APOEL managed to score twice but Real Madrid won by 5–2 and reached the semi-finals with an aggregate score of 8-2.

Besides football, APOEL now cultivates several other sports with hundreds of athletes. These include basketball, volleyball, futsal, table tennis, cycling, archery, swimming and bowling. At some point in history APOEL even had a rugby team which unfortunately did not bloom.  APOEL has a goal to be a protagonist in every sport its athletes are involved. Its history demands so.